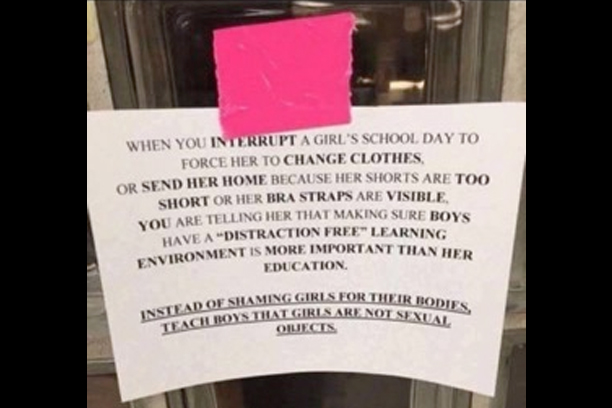 On the middle school website the stated purpose “for student dress and grooming standards is to foster an educational environment.” Except at back to school night I heard a different story from the gym teacher. The presentation started out predictably dull. The kids were slated for hockey (wow!) and football (ooh!) and soccer (fantastic!) and, oh, the female gym teacher almost forgot to mention—girls were not permitted to wear yoga pants or leggings, because it might cause the boys to spring an erection.

Yes, you read that correctly. My daughter, barely 13, cannot wear yoga pants or leggings in gym, because some kid might be aroused. The teacher elaborated. She said boys this age had a difficult time controlling themselves. They could be stirred by the sight of a girl in exercise pants in exercise class. The resulting erection could be embarrassing. Hence, in order to prevent this type of humiliation for the boys the gym teacher required the girls put shorts over their exercise pants.

It all happened so fast. Did I actually hear the teacher correctly? After class I went back to speak with her again. She clarified. Well, she tried to clarify, as one tries to dig her way from a pile of quicksand. She told me one of the reasons this is an issue is because she requires the students to tuck in their shirts, you know, to be respectful. She believes when the girls have their shirts tucked in, wearing yoga pants, it’s just too revealing for the boys. Got it?

In the 1960s and ‘70s, the girls all wore miniskirts that barely covered their rears, and the boys still managed to graduate. Walk on to any college campus today and one spots students wearing yoga pants, sweatpants and even pajamas to class. Somehow an educational environment is still maintained. The male students find a way to suppress any possible sexual feelings while in the classroom because it would be inappropriate otherwise.

Yet middle and high school dress codes are popping up with reckless abandon around the country. Girls can’t wear tank tops or spaghetti straps on dresses. Skirts need to be no shorter than fingertip length. Just fire off a quick Google search, and you’ll be startled by the number of schools limiting what girls—but often not boys—can wear. It’s happening in Kentucky. It’s in Texas. And in Indiana. And in Oregon. The girls in New Jersey were so fed up with the insinuation that they are a disruption they created the Twitter hashtag #Iammorethanadistraction.

Why is there a sudden problem with clothing being so terribly distracting in school?

The objectification of a woman’s body is pervasive in our culture. I don’t know of a single woman who hasn’t experienced cat calling, unwanted whistling, fear of being followed, sexual harassment or sexual assault. A national poll conducted by The Washington Post and Kaiser Family Foundation in 2015 reported that 25 percent of women attending college experienced unwanted sexual incidents. The problem isn’t that we aren’t creating an educational environment in school. It’s that we aren’t teaching boys and young men that women are not sexual beings first and foremost.

Banning yoga pants for the purpose of avoiding unwanted erections sends the message that boys are programmed to respond and can’t help what their bodies do. Boys and men are responsible for their actions. It’s no wonder some don’t stop unwanted sexual advances when they hear a woman saying, “No.” Short skirts and leggings don’t cause sexual advances—the inability to manage one’s desires does.

Instead of draconian dress codes what we really need are conduct codes. Enough with stifling the girls to help the boys control themselves. That’s demeaning to the boys as much as it is to the girls. Why not state the expectation that on school grounds any sexual activity or expression will not be tolerated. Children can learn to control themselves when there are clear expectations for how to behave with consequences for misconduct.

I came home from back-to-school night and discussed the gym teacher’s remarks with a male friend. He thought I shouldn’t have told my daughter the reason she couldn’t wear yoga pants. I disagree, strongly. Girls need women to break down these issues when they are young, before they are shamed or harassed or raped. It’s one step closer to showing girls that wearing a short skirt isn’t akin to asking for “it”. I need to show my daughter what saying no looks like. And I need to help change this policy so she can see what change looks like.

Shielding my daughter from the realities of being a woman will not help her stay safe in any environment, educational or otherwise. Speaking up about, in her presence, will.

Side Note: After speaking with the school’s assistant principal I was assured the gym teacher would be reprimanded for her inappropriate remarks, and the school is working on crafting a policy for gym clothes.